The original article was published in

The COVID-19 pandemic has in many ways provided an incubator for new business processes, and one certainty is we’ll look different on the other side of this than we did before it, SunTec CTO Mike Yesudas said.

The last two years have been unique in that suddenly, the world had to work from home. Business processes had to change out of necessity quickly. That removed usual frictions for everything from payments to digitization to intelligence.

If there had been no COVID-19 pandemic, companies would have acknowledged new technologies but would have stuck with the familiar. Instead, there was no choice but to look to these new options.

We’ve also had to pivot in 2021, Yesudas said. One year ago, we were ready for the virus to be primarily controlled. Vaccines were on the way, and a return to normalcy was pending. But then came the new variants and thoughtful planning focused on assuming the virus would remain. That means conversations about digitizations must also continue.

The expectations for every company’s digital capability have soared since 2019, Yesudas said. Before that time, a company could have some sort of mobile app with suppliers, and that would suffice.

Not any more. Such a mentality, and the products it spawns, are already dated. The company that wants to differentiate must focus on intelligence specifically artificial intelligence.

But there’s a catch. Most business cases on either side of the pandemic will look different, which means data gleaned before it will have limited if any use.

“Data collection starts with should have started yesterday,” Yesudas said. “But, it’s not too late to start collecting the data from today and focusing on how your data looks. So data will play a big part into 2022 as opposed to what we saw in years past.”

The most significant fallacy people encounter is the assumption data is continuous and can be easily integrated into models. Whereas facial recognition, for example, can rely on historical data, as faces do not change, but in business, that data is constantly in flux. Significant influences like a pandemic, or regulation, stop your data flow, and when it resumes again, it will be different.

“Definitely our banking is going to be changed because pre-2019, pre2020, and post-2020. It’s almost a different world. You can sense it,” Yesudas said. “Just about anything that you want to do in banking today is going in that direction.”

Now you need to be meet the expectations of an increasingly online base used to Amazon and Netflix, Yesudas said. The differentiator must be there right out of the gate. The secret sauce?

“In my opinion, it would be the ones that would liberate the data and combine that with the user experience because we are not technically in the software world anymore,” he said. “We have moved to the intelligence world, which means things are learning, giving a better experience, and making businesses leverage the data they’ve got.”

Yesudas said that the banking world is watching blockchain technology but not using it much. The technology is there, but they need an adoption driver. Mobile phones have been around since the ’90s, but it took the iPhone to change the industry. Blockchain awaits a similar spark.

“If you follow some of the trends, with big data, for example, in 2008, many people remember it for being the year of the great financial crisis,” Yesudas said. “But if you look back at technology before 2008, and up to 2008, you will see all these big data things that were coming up. You will see lots of the big data technologies come out after 2008.”

“Now 12 years later, we have gone with another massive global event. And I believe the next one is actually intelligence that comes out of data. It’s not just data by itself in terms of storage. That was what big data was, but it’s actually deriving the intelligence from it. That’s what the revolution here is for, and that’s going to be the next big thing.”

Most companies have more data than they realize, but they do not seem to leverage it in the best way, Yesudas said. Banking has reams of the stuff that goes to waste, hurting both the customer and the bank. Accounts should be intuitive and let you know when your funds are low or ask you to ask someone to transfer funds as a top-up. For many developments, we have yet to see the data that powers them is already present.

The process begins with solid data surveillance capabilities, Yesudas explained. Add analytics and ensure a fresh flow because if your data is more than 30 days old, it is probably obsolete.

Yesudas said that supply chain participants have learned many lessons over the past two years. The most severe issues were more upstream than empty shelves and a shortage of drivers. Even when the product was available, container shortages in some regions further delayed shipping.

Industries had to get used to maintaining two unique supply chains, one for data and one for the product, Yesudas said. That data was crucial, as companies had hours instead of days or weeks to change suppliers or shippers and were not used to that.

This article was originally published in lendacademy.com, Read More.

“The views or opinions expressed in this article are those of the author. They do not purport to reflect the opinions or views of SunTec’’. 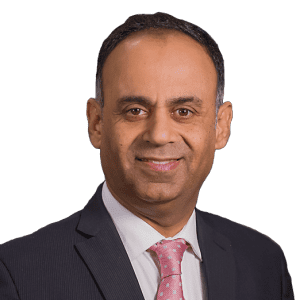 Over the last 26+ years, Amit has handled all the markets in advanced and emerging economies, interacting with global and local banks alike.

He is a keen business strategist and regularly comments on a range of banking and technology related issues. He has authored several articles and speaks regularly on contemporary topics like trends in banking technology, customer experience management, digital banking, channels, and core banking transformations, to name a few.

I’m in for monthly insights!

Banks Should not Lose Human Touch in the Digital Era

The Indian Banking Opportunity – Transforming the Business of Banking

Are fintechs competition or partners to banks?

This website uses cookies to improve your experience while you navigate through the website. Out of these cookies, the cookies that are categorized as necessary are stored on your browser as they are essential for the working of basic functionalities of the website. We also use third-party cookies that help us analyze and understand how you use this website. These cookies will be stored in your browser only with your consent. You also have the option to opt-out of these cookies. But opting out of some of these cookies may have an effect on your browsing experience.
Necessary Always Enabled
Necessary cookies are absolutely essential for the website to function properly. This category only includes cookies that ensures basic functionalities and security features of the website. These cookies do not store any personal information.
Non-necessary
Any cookies that may not be particularly necessary for the website to function and is used specifically to collect user personal data via analytics, ads, other embedded contents are termed as non-necessary cookies. It is mandatory to procure user consent prior to running these cookies on your website.
SAVE & ACCEPT

Deepen your customer relationships, start with your youngest customers. Here’s how!